the Mask We Wear

"Whatever the image of yourself, it's a mask and it's hiding emptiness."

My Secret Is Silence 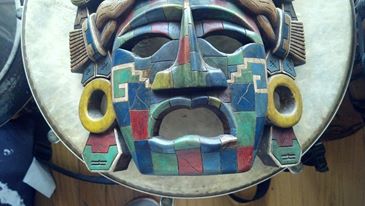 When I was a student learning about energy healing, in a two year course at WhiteWinds Institute, I had recurring dreams whereby I was seeing people with heavy face paint & makeup on. It covered their identity. It happened frequently enough that I asked my teacher about it.

He said, "Stan, who are YOU under that mask? Who are you really if you take the mask off?"

Just from that inquiry, the dreams stopped. I began to question myself about who or what I was pretending to be in life. I stopped pretending that everything was perfect or that I was ok, or that I was strong, or didn't have any problems... In short I stopped denying my own humanness, began embracing my vulnerabilities, and began to let my guard down. I began to be more real and authentic.

This was about 12 years or so ago.

More recently, a mask figure similar to the one above came into my awareness. In deep meditation, I saw a "face" similar to that mask carved onto a mountainside of black rock. The mouth itself was a vast cavernous opening. "I" was minuscule next to it.

It was so enormous and dark - and all of the stone, all of the mountain, all of the face itself was black like obsidian - that it frightened me. It neither reflected nor gave off light of any kind.

I really thought this was my darkness and karma that was mine to work off, and believed that I was doomed to lifetimes of suffering for my character flaws... my "sins".

Again, I consulted with my teacher. He said "That's YOU."

Sigh...really? I kinda knew that, but hearing it from him made a positive difference. He offered little else. It was up to me to figure it out.

In meditation, the feeling of the whole vision and its enormity, its mystery, and in particular the cavernous mouth stayed with me. Then it dawned on me...

"Go into that darkness, go into the mouth itself. BE with the mystery. I am already the mystery." As Adyashanti mentions above, this is the "emptiness" behind the mask.

That constant exploration, that relationship, facing the fears that arise, yet stepping into in anyway, is where I have been for more than a year now. Everything I thought I knew is falling away, and the outer world is reflecting this.

And so too, this is happening with many people and the world itself. Everything looks and feels upside down and in turmoil. The earth itself seems to rebelling as it quakes and blows hurricanes at us. Yet it is a great time of old structures and paradigms falling away. It is a time of redefining who and what we are.

Most importantly, it is a time of being curious to the emptiness, the mystery, the enormity of who we really are, the love that we really are... and staying present as well as we can within ourselves.

There is no wrong way to do it, we just need to be nice to ourselves and each other along the way.

Big Love and thanks to you all, I look forward to being with you soon.

Reply JamosFauts
4:24 AM on June 5, 2021
This is nicely put. !
https://topessaywritingbase.com/
college essay editing
paper help
nyu college application essay
papers writing service
essay why i want to go to college
how to write an argument essay
essays services
couseworks
how to begin college essay
xyz homework
how to write a cover page for an essay
write my paper
website that writes essays for you
https://smilevault1.webs.com/apps/blog/show/48256738-comprar-bitc
oins-con-tarjeta-de-cr

Reply JamosFauts
5:49 PM on June 10, 2021
Useful facts. Thanks a lot!
https://essaypromaster.com/
what to write a narrative essay about
https://essayssolution.com/
how to write a good narrative essay
https://discountedessays.com/
i can t write an essay
https://topessayservicescloud.com/
essay help forum
https://inspirationl.webs.com/apps/guestbook/